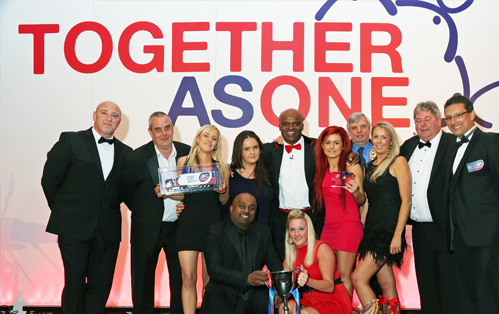 A Shepherds Bush based courier firm has been voted as “UK Depot of the Year 2012” for the fifth time by
colleagues from the UK’s largest independent delivery network, APC Overnight.

Point to Point beat 115 hopefuls from across the UK to claim the title at a glittering awards ceremony attended by 500 people.

Kevin Grey, the firm’s managing director, took to the stage to receive the award on behalf of his 80 colleagues.
On collecting the award, Kevin said: “This is a fantastic result and the perfect way to cap off a really successful year, Point to Point also won the national Couriers associations Best Courier Company Award. Since founding the business in 1983 and joining the APC Overnight network in 1999, the business has gone from strength to strength.

“We have a really strong group of customers who use us again and again. We know that, for them, our ability to offer next day delivery throughout the UK from our base in Shepherds Bush is a key advantage. We’re now hoping to make 2013 even more successful for the business than last year.”

Head of Network at APC Overnight, Steve Cornwell, added; “Point to Point has been providing an exceptional service for local people and businesses for a number of years now. The company has gone from strength to strength and its well-rounded performance during 2012 has led to it being crowned UK Depot of the Year.
“Thanks to a belief in strong local service and on-time delivery, we expect Point to Point to continue to increase its business during the coming years.”